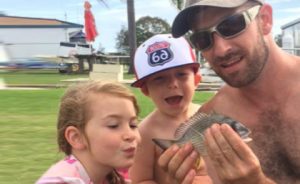 Our grief journey started very suddenly on 24 February 2018, when I received a call at 2.00am from my ex-partner’s girlfriend, hysterically telling me that he was gone.

Clayton was 34 years old when he passed away in a single vehicle car accident in a rural town called Merriwa, in the upper Hunter Valley of NSW. He was killed instantly.  From that instant so many lives changed, but most of all that of my two children.

Our journey of grief is a little different because Clayton and I were no longer a couple at the time of his death.  We had been separated for over five years, and he was in a new relationship with a partner who was 15 weeks pregnant at the time.

Clayton and I didn’t have a great relationship when he passed and I think that really took a toll on me too.  I was estranged from his family, but suddenly was thrown back into having to deal with them.  And at the same time I was of course carrying the heavy weight of my kids’ grief journey, as well as dealing with my own grief.

At the time they lost their dad, Indianna was ten years old and Lochlan was seven.  I remember so clearly the day I had to tell them that their Daddy was gone.  It was the hardest day of my life and in that instant, I saw my two beautiful children lose some of their innocence and I knew our lives had changed forever.

Honestly, I didn’t cope well with Clayton’s passing and I ended up seeing a psychologist due to nightmares, anxiety and depression.

My children also struggled, but in different ways.  Indianna was very vocal and angry in her grief and would cry and yell and think about all the things that daddy would miss – such as her first day of High School and the birth of their little sister.

Lochlan was more withdrawn and quiet in his grief, he refused to cry or talk about his loss – it is only now, two years on, that he is starting to process his loss and express his feelings.  They have both seen a psychologist since they lost dad and we are very open in our grief and lucky to have great support around us.

Over the first year there was a lot of missed school days and months of co-sleeping with me, they both dropped out of their after school activities and became very clingy.

They still both fear that they will lose me too and Lochlan especially suffers severe anxiety when I am not around.  I’m scared about this too and worry about my own safety in the car.  I’m also a lot more vigilant about my own health now too – watching the pain your children feel after losing a parent makes you want to try to ensure that won’t happen again.

Early in 2020 we felt the pain of grief again when my father (their Pop) passed away from terminal lung cancer. This new grief journey brought up a lot of bad memories for all of us, but unlike losing Clayton, we had more time to process Pop’s loss and it was a more peaceful experience of death.

I first heard about Feel the Magic not long after Clayton died.  His step mother had seen an interview on Sunrise about this amazing organisation for children dealing with grief.  Losing Clayton was my first experience with grief too and in those early days, the kids really struggled with the fact that nobody they knew had ever lost a parent and so nobody really knew what they were living through.

Indianna was not very open to going to Camp at first.  In some ways I had to force her to attend, but it was the best and most amazing experience she could have had as a result. Her buddy Jodie was absolutely amazing and I felt so comfortable leaving my grieving child in such loving hands.

The day I dropped Indianna off, she was a heartbroken, angry and confused little girl, but on the day I picked her up, although that grief was still there, it wasn’t so all consuming anymore.

Indianna was more at peace and more accepting of her grief.  She was able to put words together to describe her feelings and was able to use strategies she had learnt at Camp to deal with her often unpredictable and overwhelming emotions. But most of all, she found that she was not alone and that there were other girls just like her, who had experienced overwhelming loss too.

Feel the Magic is a great charity not just for kids, but also for their parents.  Being a parent of two grieving children is totally overwhelming and emotionally draining, and the parents groups and the online support you receive from Feel the Magic is invaluable.

I felt at times that my grief was not important or that I wasn’t even allowed to feel it because Clayton and I were already separated.  The ex-partner of the deceased is a really hard role to be in.  You are the main supporter of the children you shared and at one point, you also shared the most important bond of having kids together – but now you’re just ‘the ex’ and nobody really stops to think or ask how this has affected you.

As the ex, I also felt this overwhelming responsibility to ensure my children still had a relationship with their step-mum.  In August 2018, my kids welcomed their sister Savanah – she was the most amazing gift and came into this world exactly when my children needed her.  Savanah is a constant connection to their father and they are lucky to have a special bond with both her and her mother.

Camp Magic is an invaluable resource for Australian families trying to navigate the journey of grief.  Any opportunity I get I tell people about the amazing work they do for families like mine.

Indianna is hoping to attend Camp again soon and is considering one day becoming a children’s psychologist and volunteering at Camp Magic to help other kids just like her.

Lochlan is still very much affected by his grief and will not leave me to attend Camp.  But I really hope he will one day soon – it was such an amazing experience for Indianna – and I want him to have that too.

It has now been just over two years since we lost Clayton, and I remember people saying once all the ‘firsts’ are over, things will settle down.

In some ways it’s true that the grief is no longer so all encompassing, and the happy memories are starting to outweigh the reminder of the loss, but every day is still a challenge and anything can be a trigger.

At the moment Lochlan’s biggest fear is that he is starting to forget his Daddy.  So we talk about him all the time and share our own memories of him to help eachother.  But things like Indianna starting High School, her Year 6 farewell and other big milestones that I would give anything to have him there for, still remind us of the loss.

My children know how much their Daddy loved them and I remind them every day how proud he would be of how strong and loving they are.  The bond they have developed together other over their common loss is so precious.

If we have learnt anything from our grief journey and Feel the Magic, it is that everyone grieves differently and there is no right or wrong way to grieve.  Grief also does not have a timeline, but stays with you always – in some ways you just learn to live with the grief better.