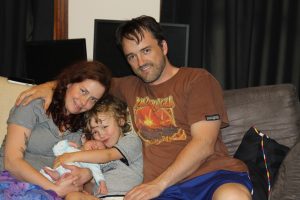 Ten years ago, my wife Emily was diagnosed with a Grade 3 Astrocytoma, which is a type of malignant brain tumour.

At the time of her diagnosis, my oldest son Jesse was only three months old. Emily had to have surgery to excise as much of the tumour as possible, then many weeks of daily radiation therapy.

There were no major side effects from this treatment, and apart from regular scans and checkups, we led a relatively normal life with our son.

We then got pregnant again with our second son, Archer in 2012.

Emily knew the massive risk that continuing this pregnancy would bring.  But she felt it was unfair for Jesse to go through life without a sibling, so decided to still go for it, despite knowing that she might not survive.

Eight months into the pregnancy, Emily had a seizure and was taken to hospital where she had to have an emergency caesarean.

After all this happened, we discovered a new tumour had appeared. Emily had surgery again to excise the secondary tumour, then more radiation therapy and chemotherapy.

Because of the aggressive nature of Astrocytoma, both the original tumour and the secondary tumour returned, and within three months Emily passed away – she was only 31 years of age.  Jesse was three years old and Archer was just four months old when it happened.

The hardest part for me was knowing that both my two boys would have to grow up without ever having the opportunity to know their mother.  It was so unfair that someone with so much still to give, and so much life yet to live, was taken from us.

Because I knew the likely outcome of Emily’s brain tumour well in advance, my grieving process really started well before she actually died.

And afterwards, I didn’t have a real opportunity to grieve because I needed to stay focussed and be the rock my kids needed to carry on.

I drew on Emily’s strength during adversity as I comforted our kids – she was always so much more worried about us than she ever was about herself.

You might think that because it happened ten years ago and because both our children were so young at the time, that there might not be quite such a grief journey for my boys to endure.  Sadly, this is not at all the case.

Jesse has seen therapists off and on since Emily died and continues to do so to this day.

My partner of six years, Sarah (with whom I have a daughter, Lucy, aged three), found Feel the Magic when she was googling childhood grief management to try to find ways to help Jesse.  And I’m so glad she did.

Jesse went to Camp twice in 2019 and developed an amazing connection with his mentor Josh.

Going to Camp helped Jesse understand he’s not alone in his grief journey.  Being grouped with other kids who have experienced a similar situation to losing his mum has given him the opportunity to share his feelings and experiences with people who truly understand how he feels.

Seeing him happy about his experiences at Camp, and excited in the lead up to Camp, has been one of the best things about being involved with Feel the Magic.

I hope to be able to send Archer to Camp soon too – he was only three months old when his mum died, so he didn’t get to know her, but certainly he feels left out when Jesse goes away to Camp.

I hope that if Archer goes to Camp it will help him understand why Jesse feels the way he does sometimes.