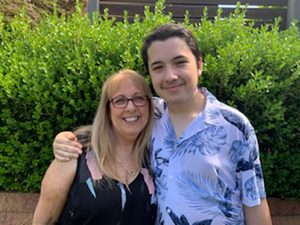 I first met my husband Kevin when he was 28 years old, and I was 38, on a Ghost Tour of St Bartholomew’s Church in Prospect.

Before I met Kev, I was quite sure I was never getting married.  It was never on the cards, but Kev was as they say just ‘the one’ for me.  He adored me just as much as I adored him.  We were married 11 months and one day after we met.

Our wedding song was ‘(I Just) Died in Your Arms’ by the band Cutting Crew.  The vows we made to each other that day meant everything to me, especially because I had never planned to get married at all.

When I was 40 years old, Kevin and I had our beautiful boy Joel.  When Joel was nearly five, Kev wanted to go back to his childhood home to live.  He had grown up in a country town called Wallabadah, in the New England region of New South Wales.  So we moved from Sydney and Wallabadah became our new home – a tiny town with a population of less than 750 people – located 55 kilometres south of Tamworth on the New England Highway.

On 10 April 2010 we went to Tamworth to go shopping.   Prior to that weekend we had ummed and ahhed about whether we’d drive there on the Saturday or the Sunday?  But then on Saturday, Kev decided he wanted some plants, so off we went to Bunnings.

We never made it to Tamworth that day.  Kev was killed in a head on collision by a driver who had fallen asleep and crossed onto the wrong side of the road.

I was driving my tiny Ford Festiva at the time and Kev was in the passenger seat, which took the full brunt of the impact.  Joel was in the back seat in his booster chair.  I was trapped in the car by the accident and held Kev in my arms as he died, he was only 35.  So we didn’t have very long together, but it was the best years of my life.

Miraculously, Joel escaped with only bruising and minor injuries.  A passing off duty paramedic, on her way to Tamworth to visit her sister, got him out the back window of my car.

My injuries on the other hand were significant.  My back was broken, I had a crushed sternum, a collapsed lung, every one of my ribs bar one was broken, and my right foot and ankle were crushed.  Apparently I did die at the scene of the accident too, but I was brought back to life.

I spent a lengthy period in hospital afterwards, then months in a wheelchair when I was finally released.  Kev’s funeral couldn’t even be held until a month after the accident occurred, because I was adamant I had to be there and before that it was impossible.

We stayed in Wallabadah until December that year because I couldn’t drive for a long time after the accident either.  Driving again was very hard and still is for me, especially long trips.

It was so hard after Kev died in so many ways.  The hardest thing immediately after the accident was not being able to be a mum because I was so smashed up, and of course, not being able to be a wife anymore.  It was hard on Joel because he had to be cared for by strangers for months, so it was almost like he lost two parents on that day because I couldn’t be there for him for so long.

And it was hard even after I got out of hospital because I was still in a wheelchair, so Joel still had to help me do things.  And of course it was hard still being in Wallabadah without Kev.

It was hard too for Joel to have to be the ‘man of the house’ from such a young age.  Today he is a strong mature young man at only 15 years old, who I am enormously proud of.  But honestly, even now, nearly ten years after Kev’s death, it’s still hard and at times we struggle.

In December 2010, because we no longer had our own home in Sydney my brother kindly offered us his granny flat to live in, so we finally moved away from Wallabadah.  We have only been back once, and I will never return again.

We lived with my brother and sister-in-law – who were amazingly supportive – for five years and it was wonderful that Joel still had a father figure in his life as a result.  Their support was incredible and without them I don’t think we would have got through.  The support of my close friends has also been a lifeline.

After that we moved out by ourselves and it is still just the two of us.  For Joel, going through primary school with all the other kids who still had their dads was difficult.  And the journey has probably got harder as he has got older.

We both had counselling and yes it helped, but it is very difficult for anyone who has not been through this kind of loss to truly understand.  People often say things like “oh I know how awful you must feel” but really, they don’t have any idea!  Because how on earth could they?

I first heard about Feel the Magic through Facebook.  I was watching soppy movies alone on the couch one night and flicking through Facebook, when I saw the A Current Affair story about them.  As soon as I watched it I was hooked, I went straight onto Feel the Magic’s website and spent hours reading and watching other people’s stories of how going to Camp had helped their kids.

I was so excited I sent off an email that same night asking for Joel to go to Camp.  I didn’t even ask him before I did it. But the next morning when I showed Joel, he was excited too and immediately said he wanted to go.

Going to Camp in December 2019 has been the most wonderful thing for Joel.  Jason his mentor was absolutely amazing – he listened and supported and helped Joel to understand he is not alone in his grief journey – and he has even been in contact since Camp to make sure that Joel is okay.

Talk time was one of the best parts of Camp, where kids got to share their stories and go through the seasons of grief together; it was a time to relax and open up that really helped Joel.

I believe that Camp helped Joel so much with strategies to manage his anger and grief – we don’t have the same meltdowns that we once did anymore – and I sincerely hope that he can go to many more Camps.

I think Camp Magic is an amazing thing for our kids – I only wish they had an adult one too!  The founders of this charity, James and Kristy, are truly heroes for our kids.

Would I recommend Camp Magic?  Oh my gosh… YES – 1000%.  When they did the closing ceremony at the end of Joel’s Camp I couldn’t stop crying.  And of course when I got Joel back it was amazing too.  I was so scared of what negative things might come out of Camp for Joel and I was worried he wouldn’t take it in the positive way that he did.  But I shouldn’t have worried because straight away he said he wanted to go back: “Yes mum, let’s book me in!”.  And he is already talking about wanting to be a mentor himself down track.

Without Camp Magic I don’t think I could ever have told our family’s story like this.  I certainly couldn’t have even talked about it openly five years ago.  But after going to Joel’s Camp, I can now see that talking about our experience can help others.

I don’t do “shoulda, woulda, coulda” – there is no point thinking about what might be if we hadn’t been on the New England Highway on that day at that time.  Unfortunately what happened that day was just totally out of our control.  Everyone has their own rollercoaster of grief and mine is still going.