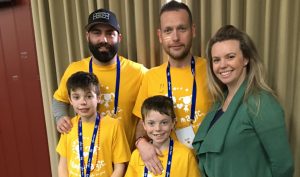 On New Year’s Eve 2012, I lost my partner and the father of my two boys, Laurie Fox, to suicide.

Laurie had been a Police Officer for almost eight years, and he had worked on some really interesting cases in his time as a Tactical Intelligence Officer.

I was 30 at the time, studying in my final year of Midwifery, after making the decision to switch careers from working in an advertising agency.  Having our first child had made me reassess my career path, and I don’t regret it one bit.  I love helping mums bring their babies into the world – it’s an absolute privilege.

I could see the signs of spiraling depression in Laurie before he took his life.  He would talk to me about his problems, but refused to seek professional help.  I sought psychological assistance for myself, in order to help him, and I do feel that it helped to some degree.  Even the coroner stated in their report that it was obvious Laurie was suffering from diagnosed severe depression and PTSD.

To his colleagues, he was just “Foxy”, always having a laugh, thinking of others first and having a brilliant mind.  Very few had any insight into the pain he was going through.  This is why when he passed away, so many were just in shock.  His funeral was testament to the kind of man he was – the Police Chapel was packed to capacity, with friends and colleagues travelling from far and wide to attend.

Charlie was four and half years old at the time and Henry was not quite three.  Both boys grieved very differently, as did I, and this was perhaps my biggest challenge.  How was I, at the age of 30, suddenly widowed, going to raise two young boys on my own, especially as we had always been such a good parenting team together?

I tried to keep to our routine as much as possible, and my family in Queensland used to rotate in turns to stay with us to help.  I had a choice to make – finish my degree or go back to work?  It was only with the support of my family that I was able to complete my degree, get my dream job as a midwife, and start a new direction of life when my boys were starting school.

About six weeks after Laurie’s death, I got our boys to see a children’s psychologist.  Not because I was overly concerned, but I wanted to make sure they were safe and grieving in a normal manner, and of course, to see what else I could do to support their ongoing needs.

We were lucky in a sense, because we also became a part of Victoria Police Legacy – an organisation for Victorian Police members and their families who have lost someone in their immediate family.  They are an instant family and they have helped immensely.  We now still feel like we have a connection with Vic Police, and we have made some lifelong friends who are in the same boat as us.

The hardest part as I continued forward with life was thinking I was ‘with it’, when in fact, clearly I was not!  I grieved for losing my partner, and the kid’s dad, but what I didn’t realise at the time was that life still continues, the boys still have to start school, to go to their sports, I still have to make money to pay for bills and put food on the table.

No amount of crying, or sitting there on the couch was going to move us forward with life.  Certainly loss of income was a huge factor, because I was studying and we only had the one income to support us.  For me, psychologically, it was also about trying to raise resilient boys all on my own, to the best of my ability, without the trauma of losing their dad affecting their everyday life.  And in order to do that, I really needed to make sure I was okay.

Everyone who has gone through grief will say that grief sucks, and it really does.  I had a lot of people telling me to do specific things – like move house NOW, go back to full-time work, move closer to family, and even to start dating!  I lost lots of friends along the way – sadly, many who were Laurie’s mates.

The last thing I wanted to do was move house.  It was the house that Laurie and I had raised our boys in together, it had lots of memories and routine – and this was something I didn’t want to disrupt so early on.  Then after about six months, I thought to myself, I can’t continue trying to put on a brave face for the boys when inside I was crumbling.  I needed to heal, and to do this, I need to see somebody to make sure I was healing in a safe manner.

I saw a psychiatrist who prescribed me a high dose of anti-depressants – I was reluctant at first, mostly because I didn’t want any of my grief to be ‘masked’.  I didn’t want it to be covered up, only to have it all come flooding back one day because I didn’t deal with it at the time.  But I quickly learned that being on anti-depressants doesn’t ‘mask grief’, it just helps you see things a bit more clearly, so you can help yourself the best way possible.

Suddenly my kids had a mum who was happy to smile again when something was funny, who looked forward to events and milestones, and I in turn, had less confused kids.

We moved home ten months after Laurie’s death, and after spending the first night in the new house, the kids’ moods and emotions instantly improved.  I didn’t realise that they needed the change as much as I did.  I was just so scared to make the change.  Hindsight is a wonderful thing…

Exactly four years to the day that Laurie passed away, Henry was involved in a house fire at my parent’s place in Queensland.  Their entire Polish restaurant – and their house – burned down, and my family with Henry, were very lucky to escape without any major injuries.  Unfortunately, we lost our dog in the fire, who was very special to Henry.  This triggered many emotional issues for Henry, who was then almost 7, and brought up grief again in a young boy who didn’t really remember losing his dad.

In my Google quest to find an organisation outside of Police Legacy who may be able to help us, I came across Feel the Magic.  And now I think, WHY didn’t I look for them years ago?  It was almost too good to be true to find help that fitted our situation.

Back then, the Camps were only held in Sydney, so we travelled to Sydney for our first one for Charlie in April 2018, and then Henry joined the October Camp the same year.  Both boys have since attended the first Melbourne camp held in August 2019.

I cannot praise Feel the Magic enough – every single person who is involved in the Camps has the biggest heart of gold, and they recognise that every kid’s grieving journey is different.  The mentors are well suited to each child, and it’s not a Camp that makes the kids feel like they are at school.

They feel supported, safe, nurtured and whether they believe they learn something or not, they all take away something they can use on a daily basis to help them with their life.  The Camp normalises the grieving process.

I do feel that up until that first Camp, my kids probably thought they were the only kids in the world to lose their dad.  It was an eye opener for them, but it also made them feel that although they are in a unique situation, there are others out there who also understand because they’ve been through a similar situation themselves.

I know telling others about Feel the Magic who have not been in our shoes won’t have the same effect; but those that have, understand and recognise what a fantastic niche organisation it must be to offer something so unique to children.

I would even go as far as saying sending your kids to Camp Magic is an investment in their own mental health (and the parents  mental health too!).  I spread the word about Camp Magic whenever I can!

The fabulous mentors are one of the best parts – each mentor has provided each of my boys with a unique perspective and experience, which they to this day, still talk about.  And the Talk Time Leaders… wow, what an amazing group of people. They just ‘get it’.

Unfortunately losing a loved someone and experiencing grief is not an easy journey for anyone.  And everyone’s journey is different.  As adults, we experience it differently to children – who probably don’t quite understand why they are in such a unique situation.  They may blame themselves, blame the other parent, blame their siblings.

At the end of the day, as a parent, it is our responsibility to ensure they grieve in a safe and healthy space – this was certainly my number one priority, and I am just so thankful that Feel the Magic helped me do this.

Feel the Magic is an organisation that can help, and has definitely helped us, to be with other children experiencing a similar journey, to navigate the highs and lows of what a normal grief journey is, and provide them with the thinking tools that help them with their emotional challenges.

I have seen such resilience and a different level of grief understanding in my boys now after their Camps, so much so that they can even help other kids in similar situations as a result (especially on the Victoria Police Legacy camps).

We recently had a student at my boys’ school lose their mother, and I heard from another teacher that my boys stepped up and asked if they could help because they know what it’s like to lose a parent. It was #proudmum moment for sure…

I have since remarried, and the boys have a little sister, Milla (who is now four and half), which means my boys have a step-father figure in their life too, but it doesn’t mean that our grieving stopped.  I’ve had many people suggest that me remarrying means I ‘am over my loss and can stop grieving too’ – but no, that’s really not how it works!

My husband, Daniel, is very supportive of still keeping the boys’ memories of their father alive.  So when I told him about this amazing Camp, he could not have been more supportive of an organisation which helps grieving children with support their emotional challenges.

It’s not like we can change our history.  Our journey just adds to our future story.  Albeit, an interesting one…