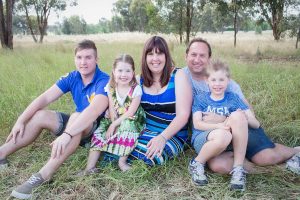 I believe in magic, I always have, but there was a time where I lost that belief.  I lost my passion, my love for the world and worst of all, my hope for my children.

On 7 September 2015, my children’s Dad died. He was our rock, my hero and best friend and the best father any child could have. It was unexpected. It was sudden. It was devastating. Suddenly I was a solo parent to a six year old, an 11 year old and a step son who was 22…  So, what next?

We floundered for a while, actually a long time, and for a while things appeared to be getting worse rather than getting better.

The worst thing was that I couldn’t fix this for my kids.  I always felt like as their mum, it was my job to fix whatever I could for them and to make sure they had a great childhood.  But I couldn’t fix this.  I wasn’t coping myself and I had a lot of trouble trying to support my kids.  My son in particular suffered a lot and it took a long time for him to recover.  For a time he was suicidal and just wanted to find his Dad.

I went back to work after about five weeks, but really I was on auto pilot and just doing what seemed normal.  I remember someone came to my house to check on us and commented we must be doing okay because the house was so clean.  Little did they know that my having a spotlessly clean house was a major sign of problems!  I had become obsessed with keeping things clean and organised.  After about ten months I had a complete breakdown, I couldn’t work and had to have extensive counselling and psychiatric help to recover.  I was diagnosed with PTSD, anxiety, depression and panic disorder.

At the 12 month anniversary I started to realise the only way through this for my kids was through me.  I had to make the decision to be okay and find a way to live again.  We started really small with a grateful box.  Every night at the dinner table we all had to write down something we were grateful for.  At first it was hard, because we were all focussed on the bad things in our lives, but each day we did it the more we found to be grateful for.  We slowly started seeing some light.

Then about 18 months after the death of their Daddy, my children Xander and Claire, attended Camp Magic. Remember how I said I believe in magic? Camp Magic is proof that fairies really exist, good can triumph over evil and there are truly good people in this world.

I had been told by many people that Camp Magic would change our lives, change my children’s lives. Initially I thought that was ridiculous and impossible. There is no way one weekend away can help my children deal with all they have been going through and make that much difference in their lives.

We arrived at Camp and were welcomed by amazing mentors, staff and a whole team of people. I remember thinking there were more adults than kids. That had to be a good thing?

I was terrified. My kids were terrified. We were all pretending to be brave and okay. This was the first time I had left them since their Dad had died and it was going to be for two nights and almost three days.

The excitement and fear was overwhelming and I left my seven year old screaming my name, with tears rolling down both our faces until the crowd separated us. What had I done?

I went to pick them up, with my support crew of friends and family – because we couldn’t do anything on our own – and to my surprise, we could hear the sounds of laughter, chatter, excitement and love. There are no words to describe the atmosphere, the emotion, the calm and the excitement – all in one place.

And then they were there – my two amazing children. From the moment I saw them I could tell there was a change. They hadn’t even spoken. They had real smiles on their faces. There was hope and love in their eyes and there was a skip in their step and I could see they were walking tall, with pride.

The closing ceremony was one of the most amazing and emotional things I have ever seen. To hear children of all ages telling their families and a room full of complete strangers about what they had learned over their weekend at Camp was beyond magic. There was humour, laughter, songs, dance, memories and my princess even ended her group with the splits! There were tributes to loved ones lost and songs to remember.

And all these children, of all different ages, stood together, knowing they are not alone. They are part of a special community and a circle of people who really Feel the Magic and create the magic in lives where all hope is lost.

Over the next few days, weeks and months my children blossomed. They taught me about grief – mine and theirs. They reminded me that we are not alone and that there is hope. They taught me to put my hand on my heart, and it works. My children talked about Camp, their friends, mentors, talk time leaders, medics and everyone involved. They talked about all of these people and things with a sense of connection that made them feel less alone, more safe and confident.

They came home from Camp Magic with physical reminders, as well as all the new knowledge they had learnt. They had woollen bracelets from an activity designed to remind them they are always connected. They had growth and empathy bands, to remind them of how much they grew in that short time at Camp. They still don’t take these off.

They have now been to two Camps and the number of bands and bracelets on their arms has grown, but nowhere near as much as their understanding, acceptance and peace with the circumstances that they have been dealt.

I believe in magic – Camp Magic! Kristy and James and their army of selfless people are changing the lives of children and families who are experiencing one of the most devastating things possible.

They gave us hope again and where there is hope there is the potential for anything.