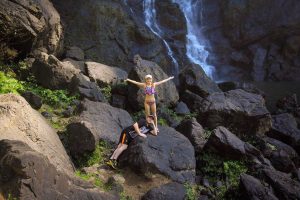 In July 2016, a week before our daughter Aisha’s 13th birthday, my ex-partner Barry died suddenly in his sleep.

Although we had separated a long time ago – when Aisha was about two years old – Barry was a constant in Aisha’s life and she spent every second weekend with him.

Barry had married when Aisha was about five years old and it was his wife Tracy (who Aisha adores) who called to tell me the devastating news.

The hardest thing was having to tell my daughter that her dad was dead.  It’s just a conversation you never dream of having to have.

Unfortunately Aisha had overheard some of my conversation on the phone, so she knew something was wrong and wanted to know immediately.  I had no time to prepare for that conversation, no time to think about what to say and how best to say it.  It was horrendous.

After that, the hardest part was not knowing what to do to make sure that Aisha was okay.

My grief was very different to hers, he was of course family because we shared a daughter, but he hadn’t been my partner for quite some time.

I absolutely still grieved for Barry, but overwhelmingly, I grieved for my daughter and what she had lost.  My daughter was grieving for her dad and no child should have to do that.  Seeing your child in so much pain is just heart wrenching.

Once the funeral (and everything that went along with that) was over, the first year after Barry’s death was not what I imagined it would be.

Aisha seemed okay, just flat.  She wouldn’t talk about losing him, or how she was feeling, but she did still talk about him – the funny things she remembered mostly.

The second year was horrendous.  Aisha had some really horrible periods of depression.  It always started with the lead up to the anniversary of her father’s death.

There were weeks at a time when she didn’t smile, she didn’t laugh, she just dragged herself through the day.  And there were months and months that I literally had to push her out the door to go to school.

I finally persuaded her to see a psychologist and when they finally got around to talking about her dad, she shut down and refused to go again.

She wouldn’t speak to the school counselor, but I spoke to her year advisor and he gave her a pass that meant she could walk out of class at any time, with no questions asked.  It was a great safety net, because it gave her the opportunity to call me if she needed to at any time.

It was not long after this that one of the girls at school heard about Aisha’s story and told her about Camp Magic.  She had lost her own dad a year or two previously and had been to Camp herself.  Aisha told me about it one night as she was heading off to bed – there was this camp she wanted to go to and could I have a look at it?

I thought it was going to be an expensive dance camp or something like that, so I was flabbergasted when I looked it up and saw what it was.

It was the first time she had ever reached out about maybe facing her loss, so I filled in the application that very night and crossed everything I had that she would be able to go.

When Aisha did go to Camp, handing her over to other people in her most vulnerable state was the most terrifying thing.  It went against every instinct I had as a mum, which was to keep her close and to be there when she needed me.  I am pretty sure I cried more than her that weekend.

Picking her up after camp, I could immediately see something had changed.  Her mentor Bella was simply amazing and I could see the connection between them was real and strong.

In the car on the way home Aisha said it was the happiest she had been since her dad had died.

Camp truly was magic.  Aisha could finally see a light and she couldn’t wait to go back.

I cannot praise Camp Magic highly enough. I tell everyone I know about it, in the hope this vital information will get to some other child, who like mine, desperately needs it.

For me, to have someone involved who understands grief and grieving children in a way I never can, is a massive support.  I no longer have to do it alone.

The Feel the Magic Facebook page is a great support too – to have a safe forum to cry, vent, ask questions and share victories is just wonderful.